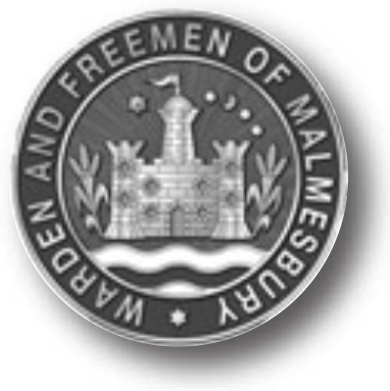 The origin of the Freemen of Malmesbury arose from the gift of land to men of Malmesbury by King Athelstan (925-940) as a reward for their assistance in his fight against the Danes. It is believed that at that time Malmesbury already had the status of a Borough and through Aldhelm had become a place of some importance and seat of learning.

The Aldermen and Burgesses lost their civic powers by the Municipal Reform Act of 1886, but their rights were preserved by an Order in Council of Queen Victoria and they became known as The Warden and Freemen of the Borough of Malmesbury. By that Act Malmesbury retained borough status and was governed by the Mayor, four Aldermen and twelve Councillors.

The Capital Burgesses own other lands and properties in and about the town and there is a charge on these properties of £10 per annum for widows and almshouses and £10 for the school which formerly existed in the town until the setting up of national schools. This charge was then applied towards a scholarship at the local secondary school until the Education Act of 1944, since when it has from time to time been used to make grants for further education.

A freeman must be a householder in the Borough or within one mile of the Borough boundary and he must either be the son of a freeman or must have married a daughter of a Freeman.

He pays a fine of £25 on admission and is initiated by the Steward of Kings Heath who strikes him thrice across the shoulders with a hazel twig reciting “Twig and turf I give to thee just as King Athelstan gave to me and hope a good brother thou wilt be”.

Kings Heath after enclosure was divided into 280 allotments which varied in area from 1¼ to approximately 2 acres. The size being graduated according to the distance from the point nearest the town. There could therefore be no more than 280 Freemen although from time to time there could be a waiting list. At present the number fluctuates around 220.

The name of the candidate is entered on one or more ( at his choice) of six lists of hundreds.

The candidate progresses up the hundred list until he reaches the top and then he is entitled to fill a vacancy amongst the landowners. This entitles him to another plot of land of approximately 1 acre at a place called “Hundred Hill” On the six hundreds there is a total of 55 Landowners. On becoming a Landowner the Freeman retains his right to his allotment on Kings Heath.

Since 1949 the rents have been collected by the Trustees to Kings Heath and distributed annually amongst the Freemen. Assistant Burgesses, Landholders and Capital Burgesses have however retained their freedom of individual management although their lands are all let to farmers.

Above the Landholders are the Assistant Burgesses, twenty-four in number. Any vacancy is filled by election from amongst the Landholders. This entitles the successful candidate to a further plot of land also about 1 acre in extent in addition to his Kings Heath allotment and Landholder’s acre.

At the top of the tree are the Capital Burgesses, now thirteen in number. They were originally the Aldermen (who were the civic head) and twelve Capital Burgesses, but under the Order in Council by Queen Victoria, they became known as Warden and Capital Burgesses. Each Capital Burgess on election is entitled to possess a field known as a Burgess Part, he retains his Kings Heath allotment, but loses the two plots he held as Landholder and Assistant Burgess. The office is held for life, subject to compliance with the residential qualification.

On death, the widow of a Commoner is entitled to retain the Kings Heath allotment, but loses other lands whether as Capital Burgess, Assistant Burgess or landholder.

A vacancy amongst the Capital burgesses is filled from amongst the Assistant Burgesses, the choice being made by the continuing Capital Burgesses.

The Court meets four times a year with the Sergeant of the Mace in attendance. There are three almshouses near the Courthouse.

Each Commoner now receives about £80 per annum (taxable) in rents from the King’s Heath of 570 acres.

The Courthouse still exists and still has the benches from the children’s school.

The Archives are in Trowbridge.

The future of the Old Corporation is in their ability to help maintain the traditional and historical background that the town has. Towards this end a body elected by the capital Burgesses and known as the Warden & Freemen Trustees are seven years into a major restoration programme of all listed buildings owned by the Corporation. Increasing amounts of revenue are also donated to worthy causes in the town.

Captain E.W.Lynam: “Translations of the Charter granted to the Freemen of Malmesbury by King Athelstan and the Ratification tereof by King William III” — Abbey Press Malmesbury 1924.

“List of Wiltshire Records earlier in date than 1836” | edited by Maurice G.Rathbone | Devizes: 1951 deals with Malmesbury records on pages 28-34.